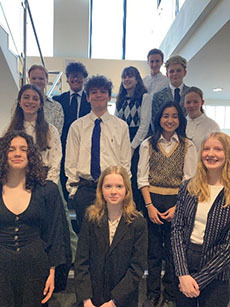 Members of the Jury, I stand before you to deliver the closing statement for the prosecution, my name is Mrs Pretsell and I represent the Crown in the case against Amery Hill.  The charge is that the students of Amery Hill performed brilliantly at the Southern Region Mock Trials Competition, and brought prestige and honour to both themselves and the school.  Members of the Jury, this is an occasion when the only credible verdict you will be able to return is guilty:  they were brilliant.

Let me remind you of the facts of the case; our barristers:  Lucy D, Albie P, Isabel P and Chloe S were dedicated and clever lawyers who prepared their cases meticulously and questioned with an unerring dedication to clarity and precision.  They were brutal - woe betide anyone who ever wants to take them on in an argument.  Supporting the barristers were the four witnesses who were questioned in these cases.  The Amery witnesses: Max J, Griff P, Aleya S and Orla T were guilty of knowing all the facts of their stories, conveying their testimony with great confidence and standing stalwart against fierce questioning. Running the court were another two students guilty of brilliance and coolness in the demanding courtroom drama.  Anya F, our court clerk, was peerless and Sophie J (usher) was as cool as a very cool cucumber.  Finally, other schools were kept on their toes by the brilliant and incisive services of jury members Sian L and Hazel R - nothing was going to get past them as they exercised their civic duty with true professionalism.

Admittedly, the Amery Hill Team did not win the competition but in mitigation it must be noted that they were Year 10 students and they were challenging teams from 6th Form Colleges.  They are David facing very many Goliaths.  They might not have defeated Goliath but they gave him bruised shins, broken fingers and a nasty suspected concussion.

So finally, members of the Jury, as you decide if this team from Amery is indeed guilty of being brilliant, I charge you to remember that these students worked so hard for five months preparing this case, they conducted themselves perfectly and they made Mrs Smith and me feel so incredibly proud to be their teachers.  You must return a unanimous verdict of guilty.

Back to News ListPreviousNext
Rss

Also in the News 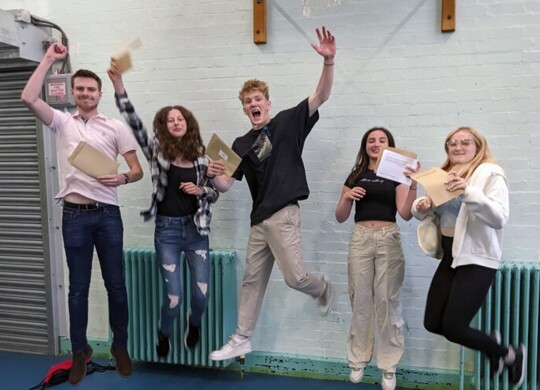 On behalf of all the Staff and Trustees at Amery Hill School we would like to congratulate and state how proud we are of all our Year 11 students, the Class of 2022, for another outstanding set of GCSE results. Over the past couple of years in particular, the Class of 2022 have had to consistently demonstrate the School’s core values of independence, creativity, active learning, resilience and empathy to ensure they were in the best possible position to achieve their very best qualifications. The outstanding results included: 78% achieved grades 9-4 (standard pass) in English and Maths 55% achieved grades 9-5 (strong pass) in English and Maths 20% achieved grades 9-7 in English and Maths 107 Grade 9/Distinction grades across a range of subjects Our students' attitude and commitment, working alongside our incredibly dedicated staff, has now ensured that each and every one of them is in the very best place to take those positive next steps into college, apprenticeships or training. Mr Mann, Headteacher, said “We are incredibly proud as a school community of the achievements of the Class of 2022. Our students are exceptional, inspiring and talented young people who have yet again demonstrated all the values and qualities that Amery Hill School stands for; the resilience they have all shown under such conditions is remarkable. On behalf of the entire school we wish them all every success, health and happiness for the future.”View Article 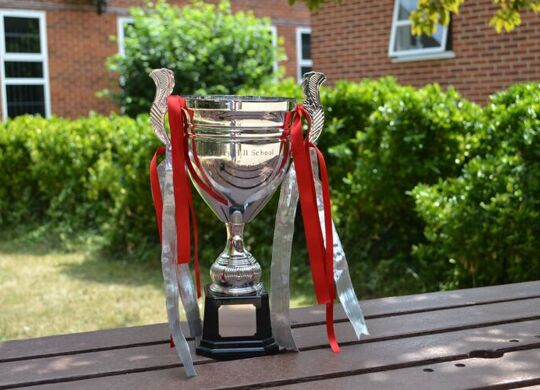 One year ago, we launched the House Championship with great excitement and some trepidation on how the House system and accompanying House Championship would unfold. It is with great delight that I reflect back on the events of the year, and share how each House has started to form its own identity, and carved out success in its own way through the year. In addition, I would like to share with you (if you haven’t heard already) the details of the incredibly close battle to claim the title of first winners of the Amery Hill House Championship.   Our student leaders of House Captains, Vice House Captains and House Representatives, have been instrumental in fostering the pastoral side of our House system, in the creation of content for the virtual common rooms on Google Classrooms, as well as helping lead their House in competitions and big events like Sports Day. We are always proud of our students at Amery Hill School, and these young leaders have been exceptional pioneers in the House system.   Last year, with our four great Houses set out in front of us, we pondered what would be inside - and I am delighted to report each House is bursting to the rafters with talent and success.   Hartfield and Pemberley hold the record for the most ICARE points, with Hartfield just taking the lead at the end of the year by just seven House points. The friendly rivalry between Hartfield and Pemberley continued on Sports Day with Hartfield taking the top position.   Pemberley holds the inter house sports record for autumn and spring, only to be beaten by Northanger in the summer rounders series, and Pemberley were second in Sports Day - an all round great sporting achievement from this House.   Mansfield has the greatest musician representation with many members contributing to the amazing music concerts and performances throughout the year. They won the House noticeboard competition, and the Year 7 bake off technical challenge - an innovative house certainly! This creativity was put to good use, as Mansfield won the second gold event for the parade on Sports Day. Northanger have proved to be quiz whizzes, winning every inter house Blooket battle, raising the most for charity - be it cash for Hello Yellow or donations for the Alton Food Bank, and performed particularly well in the science challenges set in class through the year.   The final standings were incredibly close. Northanger entered the final few weeks of term with an imposing lead, but the other Houses were not deterred, and the difference between first and second place was just 193 points, and between second and third, 304 points. Ultimately Northanger prevailed, despite Hartfield giving them a run for their money!   A huge congratulations to Northanger House with a very well-deserved victory - they certainly found the key to success, just like their House motto. After a special assembly where Northanger were able to raise the House Cup, hear congratulatory messages from their Head of House, Mr J Eacott, and the House Captains, all the Northanger students enjoyed Period 6 off timetable with some treats and time to relax and enjoy each other’s company as a House team.   The whole student body has been a great sport this year, and whilst there inevitably is some disappointment when success is not as forthcoming as hoped, September brings us a reset of the points, we welcome new Year 7 students into the fold and the adventure begins all over again. Dr Rigg, House Championship Co-ordinatorView Article